I finished my last final for university yesterday, so back to the project!

Here is Elizabeth's Hylton’s report from her volunteer time in the village during November.  Thank you Betty for your great work!

1)    Updating villagers on the status and mission of the project.
a.    Updating Gustavo
i.    Some kids from the village met me at the dock on the river and lead me directly to Gustavo’s house. After being shown around the living quarters, I sat down with Gustavo and explained to him all of the things I was planning to do and why I had come to La Libertad. 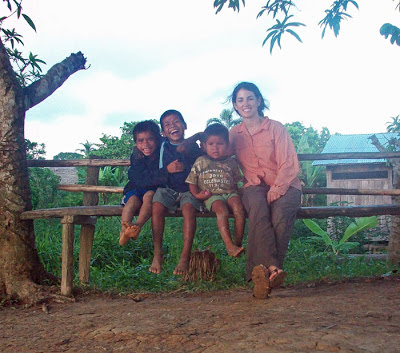 b.    Updating the village Chief:
i.    I then asked if I could please be introduced to the village Chief so I could explain everything to him and anyone else in the village would like to know. He said no problem and we could go after lunch. We never went to the Chief’s house. After asking more than a couple of times over the course of the next couple days to be introduced and continuing to get what seemed to be excuses or delayed, that he was fishing, or we would go in the afternoon, I realized that I would not be introduced to him and I never understood why. I felt a little uncomfortable because Ben had made it clear that it was important to be introduced to the Chief and when walking through the village I had no idea whether or not I was passing him or his house. (Director’s comment –A new Chief, Edgar Panafela, was elected two weeks after Betty’s visit.  Part of the reason that Betty was not introduced to the chief was political.  The old chief lost the election 2 weeks after her visit.  He was not as supportive of the project as the new chief, who ran on a platform of change and development.  Gustavo did not want to tell Betty this because he has much hope for the project and did not want to cast anything in a negative light.  I have explained to him that it is better if the volunteers know, honestly, what is going on.  It's something we are working on.) 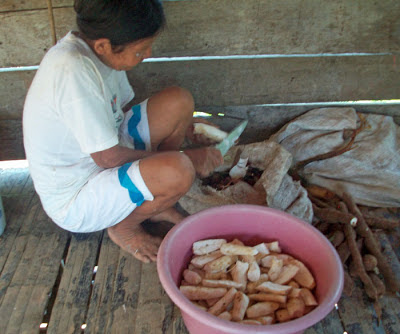 c.     Updating the villagers:
i.    Gustavo did set up a meeting with all of the people who have applied for a small business loan. We met at this home and everyone attended the meeting except for Alirio Caisara. I explained all the new information that I had about the project which Ben had informed me of before leaving for the village “The project is now incorporated in the US State of Maine as a charitable organization (foundation).  We also have a small board of directors.  We are planning our first fundraiser for this January or February, during which we hope to raise 6 million pesos for small business loans for the village. Also tell them that the big hurdle after the fundraiser is applying for non-profit federal tax exemption in the US.  Unfortunately this is very expensive, takes much time, and includes over 40 pages of paperwork.  With luck we will apply for our exemption after the fundraiser (if it is successful).”
ii.    The overall response was… “and when will we receive the money” They are very anxious to know when and how they will get the money from the loans, I also informed them that two more volunteers will be coming with more information in a couple of months.
(Director’s comment –After our December board meeting we have decided to not make 100% loans to villagers.  This is for two main reasons.  The first is that the villagers will not have a strong incentive to repay the loan, and no property (all land is village owned) which may be used as collateral.  The second is that we do not have the money to make many loans.
We are now trying to develop a “Village Bank” in La Libertad.  This is based on a model used by Catholic Relief Services.  More on this in a coming blog post.)
2)    Assist with finishing the kitchen/laundry/shower house
a.    In my first conversation with Gustavo I explained that I would like to help him finish this room and let him know that Ben had some money that he could send down for us to buy supplies. He said that we could work on it on Saturday.
b.    Later that day I realized that it was the same room that his family was living in. I am not sure where they slept before, but it is currently where all of them are sleeping. On Saturday Gustavo left early in the morning, when he returned in the afternoon he explained that his family is staying there and that he needs to finish his main house and then he will move. He said he planned on starting work on it a day or to after I left. It is hard to stay whether or not he told me that because he thought it was what I wanted to hear or that he would actually begin work. He definitely does have a lot of palms drying out for the roof, but it seems he would be in need of a lot of supplies to finish all of the work that he explained to me. He knows that two volunteers are coming in two months, so his goal is to have it completed by then. 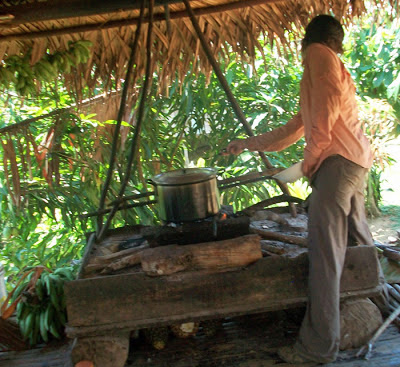 3)    Create a rough map of the surrounding watershed
a.    I created a map of the village. I will digitize the map when I have my computer in one month a put it on the Amazon Pueblo web site. Unfortunately being there is the dry season it was very difficult for me to imagine how different the water situation will be in the rainy season. Overall, I think a big problem with their watershed is that it does not appear they have a dedicated place where they use the bathroom. One of the plantation spots has already been cleared and started, from Oilva.
4)    Develop water use/conservation recommendations that would tie into development
a.    While I was in the village there was very little water. The use of water was in the village was very minimal. It seems that a beneficial tie into development is simply more rain-capture systems. Also setting up an area/bathroom for the houses to use would be extremely beneficial in protecting their watershed and health. 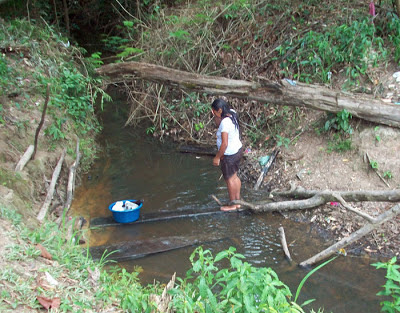 5)    Teaching English
a.    I held informal English classes for a couple hours a day while I was there. I found it best to just work with one or two students at a time, having direct conversation with them to allow them to practice speaking individually. If I had more time I would have liked to set up more formal classes per day, one with the younger kids and one with kids over 12. I organized the teaching materials that were left in the village, but if anyone plans on going to teach English for a longer period more poster board paper and markers would be helpful. If anyone wants information on what is in the bag of teaching materials feel free to email me.
6)    Check status of solar panel and electrical connections.
a.    They use this everyday and it is all working fine. I charged my camera on it and had no problems at all. They are very good about disconnecting it at night.
7)    LifeStraw Family Water Filters.
a.    Volunteers: I cleaned and tested the water filter left at the village for the volunteers and it is working. There is also information on the filters in the volunteer house.
b.    Gustavo’s: When I asked Gustavo if he had been using his water filter he said of course and explained how important clean water is. Unfortunately, it was pretty clear that they had not been using the filter. It was sitting on the bunk bed unmoved the entire time I was there and had spider webs on it when I arrived. I am not sure why they don’t use it, maybe because it is just one more thing to add on their list of daily things to do. When I asked him if he was knew how to use and clean it, he said yes.
8)    Help with small business planning
a.    I went on a tour of Oilva’s plantation. 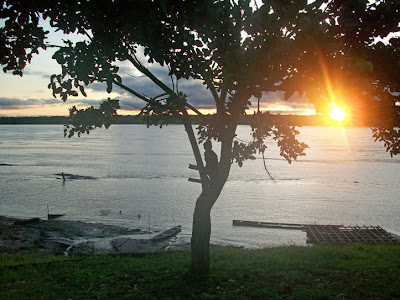 Posted by Benjamin Angulo at 11:55 AM No comments: