Two years ago yesterday I was chilling out in hammocks and handmade huts in an indigenous village in the Colombian Amazon. Yesterday I was in a hammock in a parking lot. 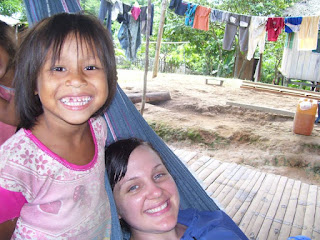 It was a bit of a challenging week in the office and that thought gave me pause.

What have I done in the two years since I had that big adventure? How well have I lived up to my hope to not lose sight of what I learned in the rainforest? Am I living life to the fullest now?

2013 was a big year of growth for me, spurred in part by my “30 Before 30” list. I visited 5 coutries on 3 continents and visited friends I hadn’t seen in many years. I made new friends and learned about lives very different from my own. I passed the US Foreign Service written exam with the goal to become a diplomat – to continue traveling and helping others.

And yet, in the years since, I feel like I’ve gotten comfortable in my surroundings again. I’ve lived in my current apartment for 3.5 years – longer than I’ve lived anywhere as an adult. I landed a job at a veritable dream company – though not in a geographic area in which I wished to stay permanently – after finding out I didn’t move on to the next stage in the Foreign Service selection process.

What happened to what I learned in the Amazon? To be courageous in the face of the unfamiliar, to lean on those surrounding you, to be joyful and content with whatever you have – however little it may be, to share what is yours, to pay attention to nature and the gifts she provides, to celebrate what connects everyone as living beings? 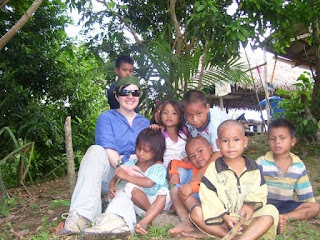 I learned that year that, at my core, I’m a communicator and a connector. Whether through speech, song, touch, or written word, I enjoy the give and take of story-sharing, joint experiences, and making others feel at ease. When a wild baby monkey climbed into my lap to howl along as I played my guitar in the rainforest, I felt connected. When a young Israeli soldier sat next to me on the bus and I laughed at not one, but two rifles strapped across his chest, and he laughed back – which turned into a conversation that lasted for hours on the bus and hasn’t stopped, thanks to digital communication – I felt connected. When I had lunch in London with a friend who lives in Brooklyn, I marveled at the connections life can throw our way. 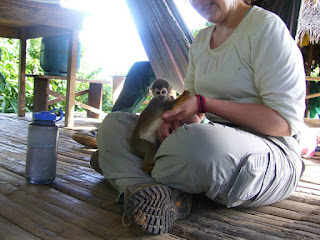 I don’t want to spend my days in a hammock in a parking lot. I want to spend my days connecting with the world around me. In our fast-paced modern society we miss so much that I found so soothing in the jungle. The simple comfort of physical touch or the sheer happiness of a young child’s laughter are all too often misconstrued as annoying or inappropriate on a daily basis. How did I lose those memories so quickly? What can I do to preserve and embody that connection and peace in a life filled with modern demands?

Realistically, I understand at this point in my life it’s impractical for me to give up everything and move into a hut in La Libertad – but that’s exactly what my friend Ben, founder of the Amazon Pueblo non-profit organization, did last year. His full-time presence (divided between the village and the nearby city of Leticia, for logistical reasons) in Colombia has ensured the growth and expansion of Amazon Pueblo in ways we could only dream a few short years ago. His in-person efforts have resulted in bringing safe electricity to the villagers, a safe dock for villagers and visitors which can facilitate more tourism, and therefore more income, and legal recognition in both the US and Colombia of Amazon Pueblo as a non-profit organization dedicated to improving sustainability and quality of life in the village.

Those of us serving on the board of directors here at home support and do what we can, but everyone is always “so busy” these days – it can be difficult to even find the time to write. Showing up and giving of your own time and energy can make such a difference in the world around you. By the same token, how you choose to use your time and energy makes a difference in you. That’s what I need to examine more carefully. Am I making the best use of my time and energy? Am I content with my choices and the results? Am I practicing what I’ve learned and living a life of purpose and peace, or am I falling into the unexamined life of the daily rat race?

I’m the only one who can answer these questions for myself – but it’s worth taking the time to pause and reflect on a regular basis.

Emerald fish scuptulre for sale for the Amazon! 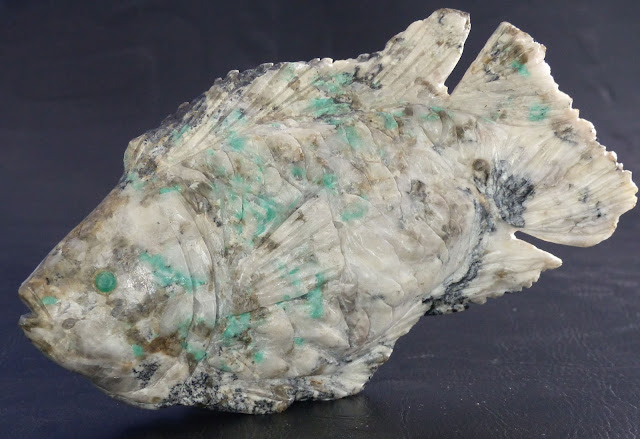 I found this fish carving the last time I was in the emerald district in Bogotá. While negotiating the price, I had a hard time pretending that I was not really interested in buying it! I think it is a beautiful sculpture. I have it in my kitchen where I enjoy it every day. It is a good size and weight, not too big or too small. Much fine detail has gone into the carving, and its body seems to be in mid-swim in the water. It is very dynamic in its presentation.

The material is emerald in emerald-bearing matrix. It is from the Muzo mines in Boyaca, Colombia. The eyes are two opaque, cut emerald gems.

I am coming back from Colombia to the USA on June 28. Therefore, I will not be able to ship it until that time.

I am selling this to support my volunteer work with the project.

If interested, please check out my Ebay listing: http://www.ebay.com/itm/Colombian-Emerald-Matrix-Fish-Sculpture-/201374089058?ssPageName=ADME:L:LCA:US:1123
Posted by Benjamin Angulo at 4:00 PM No comments: 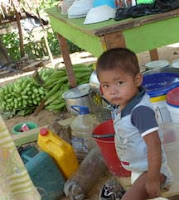 501c3
Amazon Pueblo is now officially a 501(c)(3) federally tax-exempt nonprofit.  My mom received our determination letter in the mail this week, dropped it off to Julie (our secretary), who scanned and emailed it to me in the Amazon.  Thanks mom and Julie!

I expect the designation to do a number of things for us:
1.       People who give donation can now deduct them on their federal tax return.
2.       Certain expenses that we personally spend to complete our mission may also be deductible.  Travel to the Amazon as a director is one thing that would be covered, providing certain condition are met (which, if I remember correctly, are not unreasonable).
3.       We are eligible for discount specialized nonprofit accounting software and other programs.
4.       We are eligible to sign up with other nonprofit organizations which offer free services (like accounting audits, website design, marketing, and management consultation).  I believe that work-at-home volunteers may also be identified to help us with other things.
5.       We are eligible to receive grants from the government, other nonprofits, and foundations.
6.       We are eligible to receive discounts to grant support services and databases.
The only downside is that we need to find the time to access and use all of these benefits.  And if we do get a grant, that will come with another increase in work load.

Amazonian Government
This week I also received news that our grant to finish the dock and pier was approved.  The government is also interested in working with us in the future, if everything with the dock goes well.  This offers us a big opportunity, not just in the form of extra funds, but in the areas of legitimacy, better access to information, and help with the project’s goals.
I expect to meet with the governor next week to sign the documents which will permit us to work together.  Registering as the Colombian-based Fundación Amazon Pueblo was instrumental in achieving this connection.  I will take and post a picture of the signing when it happens!
Posted by Benjamin Angulo at 3:41 PM No comments:

They see the light in La Libertad!

After almost three months without a post -I AM BACK!  Much has been going on with the project.  We now have an office in Leticia.  Our Internet connection is very poor, the main reason for the lack of posting.  In July I will go back to the USA to fundraise, work, and plan.

One of the most successful infrastructure projects we have had with the project was the effort to bring electricity safely to over 100 people. The villagers mostly use electricity to power one or two compact fluorescent light bulbs, a TV, or a radio (sometimes all these things at once). The hours of electricity are from 3 pm until 9 pm, daily. 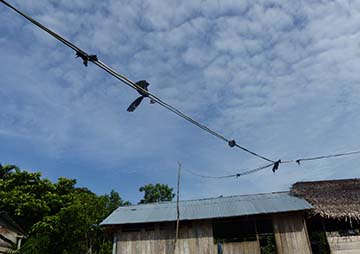 The electricity is supplied to the villages by a business named ENAM. They have a contract with the government to supply subsidized electrical power using a large diesel generator. The village has grown to have five main “streets” which radiate outward from the school buildings, which are the largest structures in the village. Four of the streets were connected to the grid properly, by heavy wires connected between 30 foot high wooden or cement poles. The fifth street had been connected to the grid by the villagers, using lightweight wire, old household extension cords, and savaged power cords from broken appliances. These were pieced together, bit-by-bit, as each house found the wire to connect to the adjoining house.

In all, 14 houses representing over 100 people were connected in this fashion. Whenever there was a high-use device (like when a person attempted to connect a clothing iron) the wire would start to burn at is weakest link. 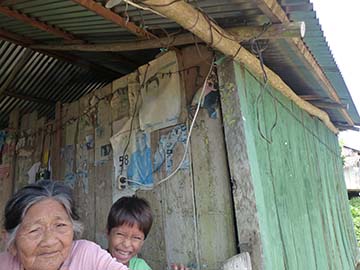 Rain would also cause problems. The water would cause short circuits, knocking out the power. At other times people would receive electrical shocks when touching wet surfaces around the connections.

Sometimes the wires were strung so lowly that people would have to duck when passing. Children would frequently play around theses live, low-hanging wires. The wires were joined by being twisted together and then wrapped with a bit of old plastic bag. 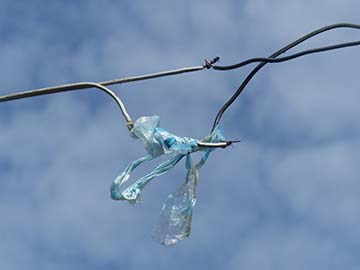 We worked with the village to submit a letter to ENAM. They arrived within 5 weeks to do the work. The village had to provide four 30 foot wooden power poles. For three days before the scheduled installation date we found, cut and carrier the poles to the sites. The Amazon Pueblo project provided the money for the gasoline, oil and refreshments needed to cut the poles.

During the installation one of the workmen from the energy company spoke with a villager. He said, in passing, that if it were not for the foreigner who submitted the request, the company would not have done the work. At last, a small success! 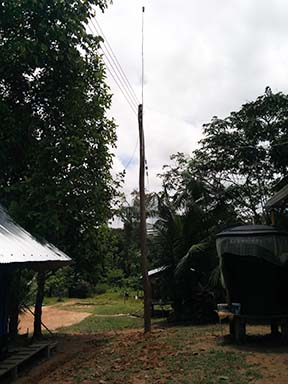 Posted by Benjamin Angulo at 6:31 PM No comments: