Not the Stairway to Heaven, but to La Libertad!

At last we are nearing the completion of our second phase of the village raft and stairs!  For what may seem like a small project, it has taken a lot of planning, talk, money, blood, sweat, and tears to get us to this point.


Thank you very much to our Swiss volunteer Stephan (who was with us during the first phase as well).  He planned, coordinated, and carried out much of the work on the stairs -with the help of some dedicated villagers.


Thank you also to Alirio the chief (who kept the village on-track), and to Manual and Oskar for cutting the wood and constructing the raft, along with many other villagers.


Our gratitude goes out to Gustavo and all the others who helped with transportation.  At times they spent over 10 hours in the river during a two-day period.  And we cannot forget Simona for her help with the trunk, painting, and raft!

We also want to thank Sully and Roxanna, who helped us to receive the grant for the governor's office in Leticia and to coordinate things from the government's side.


And now on to the most recent pictures of the raft and stairs!

And why is the raft and stairway so important?  Almost everyone who comes into the main part of the village uses the raft to help them to get off of the boat.  They then climb the stairs.  Without the stairs the climb up the side of the river bank was dangerously slippery if there was even the least bit of rain.  Pregnant women, the injured, the old and very young had the most difficulty.

People often wait on the raft for river transport.  While this may not seem very important, during rain this allows people to keep warm and dry.  Before the raft, one of the may complaints (justifiably) of the school children was that they had to wait in the rain for the school boat.  The boat picks the students up at 4:30 in the morning.  Daylight comes at 5 am.

The village partly relies on tourism for their income.  The easier it is for tourist to arrive, the more frequently they will visit La Libertad.

As La Libertad has more business growth (thanks in part to Amazon Pueblo) they need to have a safe way to transport goods.  The raft makes business transport happen more easily.  Within the next year the village hopes to establish a small store on the raft.  This will allow people traveling on the river to buy goods, as well as the villagers.  Having the store is one more source of income. 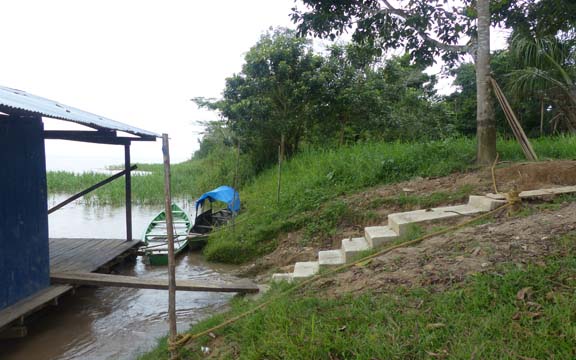 I would also like to give a big thanks to our board of directors.  Without their help and hard work we would not have the funds we need to continue to support the operations that serve the people of La Libertad.  Mil Gracias!

Please stay tuned for our next post.  It will be about the 24 year anniversary of the village.  They expect hundreds to visit La Libertad for this multi-day celebration.  It is happening this Saturday, March 12.  Can everyone say CHICHA!!!
Posted by Benjamin Angulo at 12:10 AM No comments:

During the last week in January, 2016, we were grateful to have two volunteers work with us in the village.  Fernanda was from Brazil and Rebecca was from the USA.  They both helped us to collect health, occupation, and needs data.


Fernanda is a fourth-year med student.  Rebecca is a business consultant.  They arrived in Leticia on the same day.  While in Leticia they stayed in the local hostels Alas Excusiones and Residencia Marina, both located less than a five minute walk from the project's office/apartment.


We went to each house in the village and spoke with the people.  We asked questions about their illnesses and overall health concerns.  Almost everyone in the village was receptive to speaking with us.  Some people talked much more readily, others answered with only yes/no.

Wagner, the man in the pictures with a white and red striped shirt, is the health promoter for the village.  He has had advanced first aid classes, communicable disease classes, training for snake bites and insect stings, and practice stitching up wounds.  He is responsible for seeing that the people of the village follow healthy practices.


We noticed that the people were not always able to easily express their health conditions to us.  For example, when asked if they had parasites about half the families replied that they did not.  Upon further questioning we asked if they had frequent stomach pain, diarrhea, vomiting, or other gastrointestinal issues, to which they responded, "yes", that they had at least one, and in some case all of these symptoms.  All of these symptoms are frequently caused by parasites.  One house, when asked if they had diarrhea exclaimed, "When do we NOT have diarrhea!".

So how accurate is the self-reporting that we recorded?  It is good that we have collected this information.  It would also be good (for the next volunteers possibly?) to compare the data we collected with the health data that the government's Secretary of Health has, or with their health provider insurance agency.

The villagers do have free, state provided health care.  However, they frequently do not have the money or ability to do into the city (a three hour boat ride) to receive the care.  Even if they do go, they must sometimes wait up to two days before they are seen.  Frequently the treatment given may be sub-standard (one ibuprofen table, one antibiotic tablet, then told to go home).  Given these shortcoming in the medical system, the villagers may wait until their health is so bad that they are dying -before seeking medical care!  During the past four years at least two people in the community have died en-route to the hospital in Leticia.


Rebecca and Fernanda collected the data over three days, working part-time.  Fernanda then typed the data into a small report, which is found at the end of this post.

Some interesting points are:

While some parts of this report may paint a dismal picture of the health conditions in the village, while collecting the data we were able to get a glimpse into the daily life of the villagers.  This showed us the closeness of the families, less-hurried pace of their life, and their connections to nature.


While Fernanda collected health data, Rebecca asked about the villagers' work aspirations.  Planting, harvesting, and processing yucca (cassava) was one of the most common business desires.  Fishing, increased tourism, and planting other crops was also common.  When the idea of growing and processing cacao was brought up, 96% of the houses wanted to go into the chocolate business.
Basically, everyone wanted to do everything for employment!


Fernanda and Rebecca also had time to speak with the villagers informally and try their hand at weaving the palm leaves to make a thatched roof.


We are also very thankful to Fernanda and Rebecca for helping the most ill of La Libertad to access health services in Leticia.  After collecting the health data they organized and led a trip to Leticia, spoke with the insurance providers and the clinics in order to help the people receive the services that they desperately needed.

Here is the full health report...

This health data is self-reported. and therefore subject to error.  But this info may be used to give some idea of the villager's health, may be compared to government-collected data, and may help in the design of future health studies in La Libertad.  In other words -a great start and more research is needed! 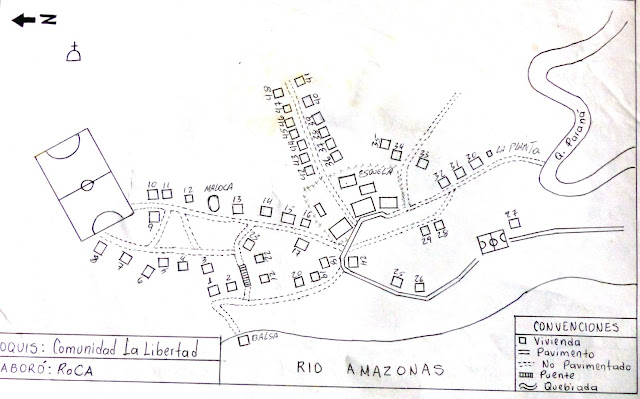 Posted by Benjamin Angulo at 9:59 PM No comments: