We've finally done it.  I received the documents in the mail today.  Over the next week I will be creating the first draft of our bylaws and, hopefully, forming the board of directors to approve them. 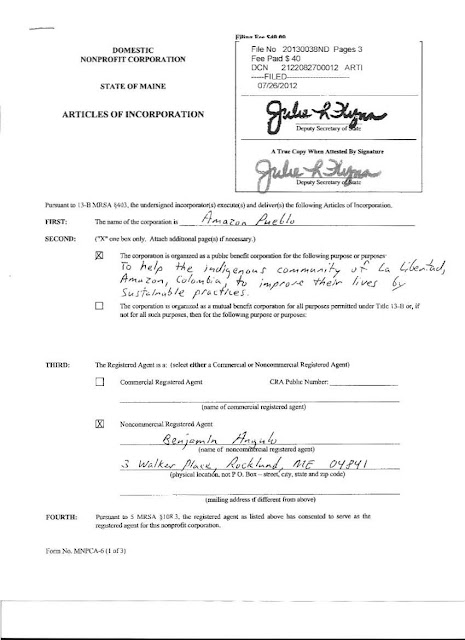 Posted by Benjamin Angulo at 10:27 PM No comments:

Pictures from the pueblo. Back to the USA next week.

I am back in Bogota after spending a week in the village. We have managed to set up a 68 watt solar panel with a voltage regulator, large motorcycle battery, power inverter, and a cell phone signal amplifier. I am happy to report everything works, however the cell phone data signal is still too weak to have Internet connectivity.

We have also installed a 200 liter water tanks with a sediment filter to be used with river water, and two Lifestraw Family water filters.

On the public relations side I have had two town meetings with the villagers and spoken with many people individually. While the village still wants clean water, English instruction and better sanitation, they are most interested in business development. I believe this is the way to go, as it encourages the villagers to become more self-sufficient. With this change the whole village was more supportive of the project. Basically we would be giving individuals small loans to start or develop small businesses. The interest from the loans will be used for water/health improvements and when the money is returned (hopefully the majority of it) we can reinvest the money in additional businesses. I am also pushing for 10% of their profits gained from the loan to be donated to the school/village for general community infrastructure improvements.

Because of this I must return home to Rockland to contact the other project volunteers, rework the project if they are in agreement, and raise more money for the loans. At the same time I will be taking computer information systems classes at the university and working part-time.  Stay tuned for more...

Posted by Benjamin Angulo at 12:31 PM No comments:

Ben back from the Jungle! Can´t anything be easy???

I have spent the last week in La Libertad, trying my best with my meager Spanish to have the people of the village understand what the project is and what we are trying to do.  It seem like the project may be taking a change.  The village does not want clean water and sanitation anywhere near the level at which they want BUSINESS!

What do I mean?  When I arrived in the village, as I was walking up the slippery mud trail from the boat landing, I was called to by the elected chief of the village.  He had been drinking at a log cutting/carrying party earlier, and was very forceful in telling me that he did not understand who I was or exactly what the project was for.  He further went on to tell me that I was not authorized to make private business deals with anyone in the village.  He ended with the question of where the village boat was (valued at over 8 thousand dollars) that he had requested from me six months earlier.  It is the custom of the villages to have the chief be the main controller of the village boat.

Over the following days I spoke twice at village meetings of over 100 people, showed my computer slide show to other small groups, and met individually or in pairs with still more people to discuss the project.  I have also been talking with other people, tour operators in the nearby city of Leticia, who have helped fill in parts of the picture.  It seems like most of the people have access to much water which they consider clean (which is NOT, and has been tested by me), and find it bothersome and difficult to dispose of their human fecal waste in ways other that going to the bathroom on the ground within 40 feet of their homes.  They also seem to not value good health as much, instead living with and adjusting to intestinal parasites and other ailments.

What did come up in all of the discussion was the will of the people to find work.  This was the most desirable part of the project by far.  It was followed (as a slightly distant second) by the desire for the villagers to have their children speak English, which was also directly related to the opportunities the villagers believed this would afford their children and families.  And how did they expect the project to provide this work?  By small business loans!

The amounts that they are requesting are usually between 500 and 1,000 dollars. Their plans sound good and workable.  Who is funded might be decided upon by a council of villagers.  And given that all are well-known in a community of 400, the hard workers and ideas that have the most chance of succeeding could be funded.  The money could be lent at a one-time interest rate of 5%, to be payed by monthly payments at a 12 or 24 month schedule.  Simple business plans may be drawn up with the borrowers and loan notes signed and notarized in the city.  When (hopefully) the loans are repaid the money may be reinvested in other businesses.

And how does community improvement and environmental sustainability fit in?  This could be the project´s way to get our foot firmly within the door.  We can also require that the people who profit form the project´s loan give a percentage of their profits back to the community for development projects, including clean water and sanitation.

Well that´s it for now.  I am very tired, had a touch of severe intestinal discomfort earlier, and I must start running around early tomorrow morning to get a resupply of food and the materials I need to mount and connect the solar panel.  Hopefully my next communication will be from my laptop within the jungle!
Posted by Benjamin Angulo at 9:12 PM No comments:

This week I have been very busy in Bogota trying to get ready for my visit to La Libertad.  I have succeeded in doing almost all of what I wanted.  Highlights include buying 2 LifeStraw  Family filters, each capable of filtering 18,000 liters of water for up to three years of use.  What is especially great about these is that they are gravity fed, filter bacteria AND viruses.

I have also managed to connect my laptop to a USB modem and to connect this to the cell phone data network in Leticia.  In fact this post is being made over that connection.  It is surprisingly fast, but I do have 5 out of 5 bars for a signal.  Tomorrow I will be able to test the connection in La Libertad.  However I do not expect much, as at times I am lucky to have 1 bar of signal strength.  Later in the week I hope to have a cell phone and data signal amplifier set up in the village.

Leticia is surprisingly cool for a change.  It was only in the 80's today.  While here I had a chance to speak with Felipe, the owner of a major tour company here in Leticia.  He had many good insights about the project which helped clarify the direction I am going to take.  One thigh he mentioned was the lack of care that most of the villagers had for improving their condition, including sanitation and water quality.  He also mentioned the jealousy that other villagers may have for Gustavo, one of the main proponents of the project in La Libertad.  These are just two of the areas I must explore further. 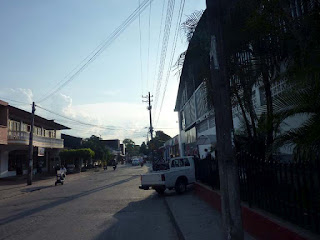 Tomorrow we will go shopping and pick up supplies for the week.  If things go well we will be back next weekend to pick up more supplies and equipment.  If things do not go well in the village we may go back to Bogota instead.  Keep your fingers crossed!

Posted by Benjamin Angulo at 9:56 PM No comments: