My Second Morning: Musings on Music, Monkeys, and Making Progress with our Project


I write to you tonight on the heels of an amazing live outdoor performance by some dear old friends in the folk-Americana-roots-rock band Spuyten Duyvil. The husband-and-wife team of Mark Miller and Beth Kaufman, who front the band, have known me for nearly a decade, when I used to perform at their Park Hill Racquet Club summer events in Yonkers, NY. In the time since those summer nights, their band has evolved immensely and grown into something I don't think any of us could have imagined way back when. They're now staples in national and regional folk festivals and have achieved significant airplay with their records. Yet, much like my friendship with Ben, we've remained in touch over the various tracks our lives have taken, and it was incredible to see them perform live tonight. I was covered in goosebumps for much of the concert, and the (very large) audience was captive during the entire show.

Why is this important? Because the feeling of a live performance for an appreciative audience is a big part of today's story for me. The energy I felt playing in La Libertad was rather similar to the energy I felt listening to Mark, Beth, and the rest of Spuyten Duyvil tonight in a park on Long Island. It reminded me why I love performing – and listening to – live music. Music has always and will always be a driving force in making me who I am.

With that, here is my second (and, apologetically, VERY long) post, taken from notes from my second morning – after my first full day - in La Libertad.

I'm thankful I played for the village last night. I almost cried. Everyone was so rapt and attentive and thankful. It was amazing. More stars than I've ever seen in my life provided the backdrop for one of the most emotional performances I've ever delivered. My skin was sticky covered in layers of sunscreen and bug spray, my clothes were dirty and soaked with sweat and humidity. I hadn't worn makeup since I'd left NYC and my hair was in the same Heidi-esque braids I'd put it in our first day in Leticia to keep it out of my face in the heat. I'd never been so completely myself for a performance while also being so completely out of my element. I usually performed in classy wine bars or smoky rock clubs in the States, but here, I was standing outside in the middle of a pathway and nobody spoke the language I was singing in. Nobody wore makeup and nobody cared that I didn't either. Though I had just arrived the day before, the villagers gathered around – babies to grandparents – and sat quietly on a bench, on rocks, and on the ground. They came trailing out of their homes once I started singing the first songs and continued to sit down and listen until it was completely dark and time for bed. 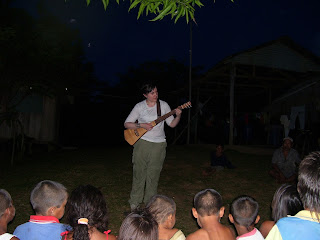 Very rarely am I so overcome with emotion while performing that it becomes difficult for me to continue playing, but this was one such instance. I have never felt the level of connection between myself and an audience – despite the language barrier, they could still feel the emotion of every song I played. The attentiveness is almost unheard of here in the states. Add to this the fact I was performing in a totally remote village in the Amazon rainforest, and I just had trouble containing the overwhelming feeling that yes, this is my real life. I am living and breathing in this very moment, and these wonderful people are sharing this moment with me. How lucky I am to be here, to have come so far from my poor and sheltered upbringing, and to be able to share something that means so much to me with people who truly appreciate it.

Aside of my performance which closed my first full day in the village, we were also immensely productive. Our day started early with the sun and the roosters, and then began the first of multiple “presentaciones” of the current state of the project with village members. Many of the interested villagers met us in our cabin for the first presentation in the morning, during which we discussed the first steps to move the project forward. Health and safety considerations for volunteers were important. We needed consistent water storage and filtration for all volunteers. We also needed better cooking accommodations and a specific volunteer kitchen so we would not need to inconvenience Gustavo's family to cook our meals. A shower area was also to be constructed in the volunteer area and the water was to be used in an order: clean for drinking, grey water for showering, and then shower water recycled to flush the toilet, so we would be using the water as much as possible and not wasting any. Luckily, the villagers all agreed to these improvements, as they understood that without proper accommodations it would be difficult for future volunteers to visit and stay for any length of time. 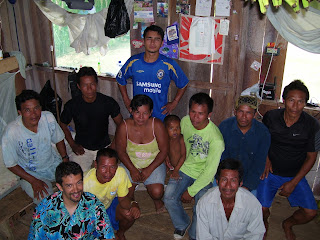 The next steps after the improvements were discussing possible options for export from the village. Ben's research had indicated that growing cocoa in the village would be relatively easy due to the climate and location, and the exported cocoa would net them quite a bit more money than other crops. It wouldn't happen overnight – a cocoa plantation takes about two years to get started – but we could discuss with neighboring tribes who were successfully growing cocoa and hopefully work together to develop the best practices and products. Throughout the day we presented I believe three or four times total, but it was really great to see good people who want to work come together to improve their intriguing paradise community.

We asked the children for the bag of teaching materials left by previous volunteers so I began sorting through them to figure out some sort of lesson plan. I would highly recommend anyone going to teach to bring tape, markers, photocopied worksheets/activity sheets with crayons, and possibly some lesson plans. Since we didn't know what we'd find I hadn't created any lesson plans prior to my trip, and I'd never formally taught English before. I've been a music teacher for almost six years, which is somewhat of a language, but it's still very different. I organized the materials and decided to do repeated units on colors, animals, and numbers with the children. I hoped to have classes with the adults too but wasn't sure what to expect yet and didn't want to get ahead of myself. 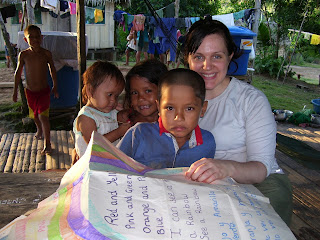 We have much work to do on the project as a whole – but this is definitely not something I can go home and ignore. I may not be back for a while but everyone has been so kind and helpful with my Spanish. When I said I wanted to go to Peru since we are so close Gustavo said he will bring me since I have never gone. So many things both for me and for them.

Aside from the presentations, work discussions, studying and lesson planning, and musical performances, I also saw one of the most beautiful displays of love I've ever seen. A baby monkey – called a mico in the village – about 3 months old had lost his mother and since latched onto one of the pet dogs Gustavo's family kept. This dog named Niño was a young male dog with fluffy hair and the children told me that's why Yuki, the mico, liked him because the fur was like a monkey's fur. Niño and Yuki were inseperable, save for when Yuki was out climbing trees. They ate and slept together and Yuki was normally found on Niño's back, playing with the children. I was amazed at this phenomenon. A domestic male dog was the surrogate mother for a wild baby monkey, and both animals were completely content with the situation. If humans could be more like this pair, what a beautiful world we would live in, where it wouldn't matter where you came from or what you looked like, but simply that two beings could offer one another help and companionship and form a symbiotic relationship. 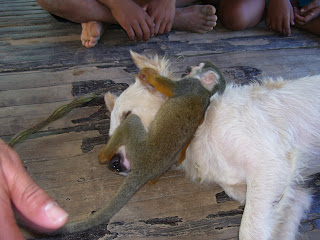 As an animal lover, the dogs in the village were a joy for me to play with. I taught Caní, a little black pup, to fetch a stick, and I often picked her up and cuddled her throughout the day. My first night in the village I'd picked her up and just stood outside gazing up at the stars, and she relaxed in my arms like she'd been mine forever. I lost my dog to cancer last September and have missed her deeply in the months since, so being able to “adopt” some village dogs for my stay there was quite healing for my heart and soul. Before my trip people told me what a good person I must be for coming here, but I'm almost certain (and feeling somewhat guilty) I got as much, if not more, out of my trip than the villagers did. 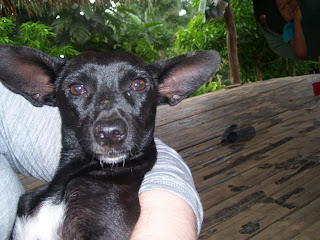 "I am learning much – in humanity, in Spanish, in friendship, and more. I am doing things most people only dream of. It's really crazy to think “This is my life.” This is. I do have a real life in NYC but this too is real. This is the life I am making for myself. This is the life I would have imagined if I'd managed to think about myself. I want adventure, I want to meet people, I want to learn and teach and help.
And now...I am. :)"