Morning Four - The Other Side of Ben's Near-Death Experience

I apologize for the lack of posts! My laptop trackpad has been acting up, selecting and deleting sections of my writing to the point of it being impossible to type anything longer than a Twitter status, but I got a new mouse so I could disable the trackpad and finally begin writing again! So, here I am!

This was the morning after Ben's “Near-Death on the Amazon” adventure, so at this point, I was truly grateful my friend had survived his ordeal. Being woken up in the middle of the night – I believe around 1130pm – to loud knocking on the cabin door amid the thunder, barking dogs, and rain was a little scary, but not as scary as losing Ben forever would have been!! Anyway, my daily writings were always a recap of the day before, so without further ado, here's an overview of the day before that happened!

This morning when I walked in the door of my “school,” children trailing behind me, I saw that someone or some thing had used the center of the floor as a toilet. While I brought my bag of materials to the front of the class, one of Gustavo's young daughters, Estefani, put her notebook down and ran to the back of the building where she knew there was a broom. Without me saying a word to her or asking for her help, she came running back with the broom, and in her little bare feet, swept the pile off the floor and out of the building. I thanked her profusely and she just skipped back to the corner to put away the broom like it was no big deal. I was simply shocked. I very rarely see that level of helpfulness and responsibility in my daily life – especially from seven-year-olds. For her to just see something that needed to be done, and do it without prompting, complaining, or demanding a reward was incredibly heartwarming.

The kids seem to be remembering words today so I feel like I'm making progress!! They're shy about speaking but at least they can tell me how old they are and play Duck Duck Goose in English. Things I'd like to have for a return trip (or that others may wish to bring): crayons and paper/printouts for the kids, small candies, tape for pictures and charts, and knowledge of more educational songs and games. The children LOVE singing the alphabet so we do that in every lesson. More songs would inspire more learning. I'd be thrilled to have chairs and desks here too but those are not quite as portable as crayons... 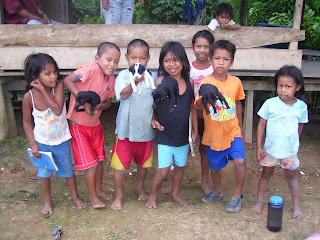 It took David and me nearly two hours to cook rice, lentils, and plantains for lunch. The wet rainforest wood was incredibly smoky and it burned my eyes and nose and I cried a lot. It was actually pretty comical – for all I live in a modern city and have stress and so much to get done, it seems like I don't know how to handle simple basic human tasks like making a fire to cook meals on. 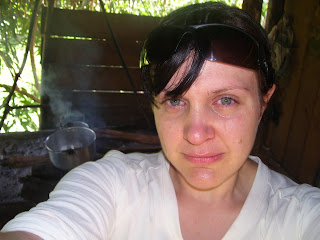 Even more amazing is that the villagers here are still living like this – and living well. I worry about not being able to pay my rent or get to work on time or afford groceries. The villagers also worry about not having enough money but they can usually find food in the jungle – fish or fruit. There's not much in the way of new clean clothing but they work together as a community to eat, wash clothes, and play in a way that reminds me of idealized Norman Rockwell prints of life in the States in the 1950s. You don't see that much anymore in the States. Our sense of community here seems to have lessened over the years, but the sense of community in La Libertad is incredibly strong.


After our afternoon class I went to the big house to play some songs. The sky looked a little dark but not too ominous. However, the breeze was a little stronger than normal and I noticed children slowly trickling off to their respective houses instead of crowding around me. As the sky darkened I realized this wasn't going to be a daily Amazon rainforest storm. My “baby” Caní had burrowed into her little sleeping area in the dirt under the roof and as the first rumble of thunder rolled through, I packed up my guitar and headed into our house. It was about an hour and a half earlier than the sun usually set and David and I hadn't made dinner.

I asked David what the men did if they didn't come back and he said they likely stayed in a hotel in Leticia so I hoped that was what had happened. We set up a lantern in the house and I think we might have eaten some crackers and peanut butter for dinner. David patiently let me practice speaking by asking me a lot of questions and listening to my rambling answers, correcting me on occasion. The storm continued to grow in intensity and I moved a few things away from our screened windows because rain began blowing in from all angles. Caní and Niño would occasionally bark at something – real or imagined – outside in the blustery black. Everything was pitch black except the lightning frequently splitting the sky apart. 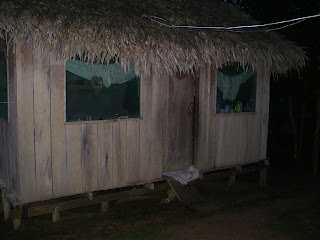 David's phone jumped us back to the 21st century around 7pm but when he tried to answer nobody was there. He thought it was Ben but of course, service in La Libertad was spotty at best, and these weren't ideal conditions.

We went to sleep shortly after that, the cacophony of the storm a strange sort of lullaby.

Around 1130pm we were awoken by a loud banging on the door, the dogs barking, and the realization that Ben and the other men had returned. It was still pouring and Ben was soaking wet but said they had supplies that needed to be brought up. David squeezed into my rain boots because they were dry in the house with us and put on a rain poncho and went back to the boat with Ben. It was probably about an hour before all the supplies had been brought up and into our house – including a new cook stove, for which I could have cried with happiness! - and Ben got dried off, warmed up, and into bed, all while telling us about the ridiculous adventures that had transpired. As it turned out, it had been Ben trying to call us...thinking he was not going to make it back to the village. I'm glad, in the end, he did!

This entire trip has been so eye opening and raised a lot of questions for me already. Healthcare? Job prospects? Do the villagers wish to live here or leave? The mix of old – cooking and bathrooms – with new – cellular phones and electricity – is so intriguing. Birth control? Where do they bury the dead? How are they not all sick with the lack of sanitation? Etc etc etc. So much to think about, but not all are questions I can ask. 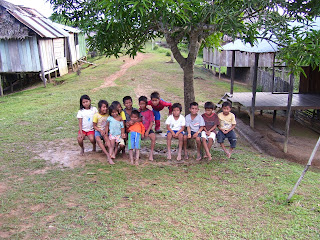