Warning: Pirates Terrorizing the River Villages of the Colombian Amazon!

Pirates in the River

If you had told me 20 years ago that I would one day be starting a social media campaign to stop REAL pirates, I would not have believed it.  BUT HERE IT GOES... 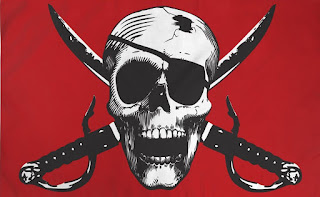 When I arrived in the village seven months ago, there was talk of pirates in the river.  I didn't think much of it, as I knew that there were instances of people having things stolen by criminals in isolated parts of the Amazon.  As I had many other things to do, I didn't investigate further.

But the rumors I was hearing about the robberies were increasing.  Some of the villagers started to warn me to be careful, as I had weekly trips on the river.  Then, one month after the quarantine in Leticia was eased, the father of one of our students in the Amazon Pueblo scholarship program was robbed at gunpoint!  Days later in a second incident, one of our scholarship students and his brother were also robbed.

At this point, we asked many questions to understand what was going on.  The remaining part of this post contains the information that we learned and the possible actions that we may take going forward.  We have not included the names of the people we spoke with in order to protect the identities of the people.

A bit of background

For the last two and a half years a criminal band has been living on Isla Corea (Korea Island), a large island close to Isla de Los Micos (Monkey Island).  This is about 3 miles downriver from the village where we work, La Libertad.  The band is composed of Peruvians (Isla Corea is located in Peruvian waters) and Brazilians.  Their island is about 25 miles upriver from the Brazilian border.  They have been periodically robbing people passing in small boats, the indigenous of the communities upriver from Isla Corea.  They are pirates.

The Colombian coast guard is very aware of the pirates.  The difficulty in stopping the criminals is because the coast guard is not allowed to enter and arrest anyone in waters outside of Colombia.  When the coast guard is patrolling, the pirates retreat to their island to go further upriver (a day's travel) to rob in another area.  That is why this problem has persisted for over two years.

After we learned a good amount of what was happening, we went to report it at the Coast Guard base in Leticia.  At times it is easier for a foreigner to talk with the police or other authorities.  The indigenous people do not always trust, or outright fear, the police or military.

At the base, we waited for about 30 minutes to speak with someone.  The person we spoke with was courteous and attentive.  He knew exactly what we were talking about.  He expressed his frustration with what was going on.  He said that they were working on a diplomatic process with the Peruvians to stop the pirates.  He asked us to send him our report using the cell phone application WhatsApp, which is common and one of the most reliable ways to communicate in the Amazon.  When I arrived in my apartment in Bogota I sent him the report.

Here is the modified version of the report:

Thank you for speaking with me in Leticia.  At this moment I am in Bogota.  Here is the information I collected from the villagers of some of the affected communities:

On October 2nd six boats were robbed by the pirates.  I spoke with one person from Puerto Triunfo who was robbed that day at 10 am.  He said they had the following weapons: two mini-Uzis, one assault rifle, four pistols, a shotgun, and a machete.

It was reported to me that the criminal band consists of 4 Brazilians and 6 Peruvians from Puerto Alegre 2nd zone.  They include members of a specific family; four brothers.  They live in a group of 6 or 7 houses on the Island of Korea.  They have a 7-meter aluminum boat with a 40 hp motor.

Map of Isla Corea pirate base and surrounding communities

They frequently leave to rob people from the top of the point of the Island of Korea.  When they are being pursued by the law they exit from the river at the bottom of the island.

They steal almost anything of value; motors, cell phones, watches, food, shoes.  They hit the people during the robberies.  On the island, they have a depository where they sell the boat motors and other goods.  For example, a stolen longtail 13hp motor (called a "peke peke" in the Amazon) may be bought for 100 to 150 dollars, 20% of its new value.

The people of the indigenous villages above the Island of Korea are afraid to pass the island or to fish in the area.  They tell me that the pirates have been operating in the area for the past two years, but the frequency of attacks has recently, and greatly, increased.

When the Colombian Coast Guard is patrolling the area, the villagers tell me that the pirates go upriver to steal from people further upriver in Tabocal on the Peruvian side of the border.

The villagers told me that the police of Santa Sofia are aware of the problem, but do not call for help when they see the pirates.

I was told that more than a year ago a group of people from Macedonia reported a robbery to the police in Leticia.  After they made the report, the pirates went to Macedonia and threatened the lives of anyone who reported them.  Since this time, the villagers are reluctant to make further reports, for fear of being killed.

The villagers told me that the police of the Puesta Yauma de Perú first zone are paid 2,500 Reales by the pirates every 15 days as a bribe to allow them to operate.

Please keep me updated on what is happening and the safety of the area.  If I can be of any further assistance, please do not hesitate to contact me.

The result of the letter to the coast guard

I contacted a friend in Colombia who followed up with the letter I sent to the Coast Guard.  She said they are in the process of trying to stop the pirates.  She mentioned that a recommendation from our contact at the Coast Guard base was to have the villagers travel with guns.  I'm not sure if this would improve or complicate the problem.  So far, no one has been killed by the pirates.  Might the escalation of arms cause more problems?

I have been attempting to contact others about the pirate problem, but communication is very difficult in the region.

Our Plan to Stop the Pirates

Gather information  We can document when attacks occur, look for patterns, and get a better idea of everything that is happening.  This will allow us to make more informed decisions

Organize the villages Meet with all of the villages being affected by the pirates.  Arrange times for the villagers to travel together in small boat "convoys", which are less of a desirable target.  Have all the villages contribute to the collection of information.

Report activity to the police and coast guard  We can periodically report on the action of the pirates to the authorities.  We may be able to more effectively coordinate the travel times of the villages to the patrol times of the coast guard boats.

One thing we DO NOT want to do

We do not want to make the problem worse.  As we mentioned earlier, so far no one has been killed.  Through the actions by Amazon Pueblo, we do not want to be responsible for the serious injury or death of the people of the river villages.  However, we do want to stop the piracy and the pirates continuing exploitation of the vulnerable people of the Amazon.  We want to help.

What do you think?  Please comment below with any ideas, and spread the word about our mission!

Posted by Benjamin Angulo at 8:20 AM