Last Week in the Amazon: It all comes together!

One month after returning from the Amazon I am finally posting for my third week in the Amazon!  I was slowed down significantly by, it is official now, Dengue Fever.  (Last week I received the Dengue test results back from the lab.  My next post will discuss "Dengue in the Colombian Amazon".) 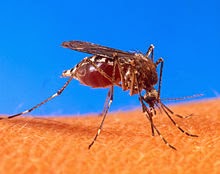 But for now, week three:

The first half of week 3 was spent working on the dock. A dock is called a balsa in Spanish.
The balsa:
• Will be used for people to more easily get off of their boats and to make their way to shore.
• Is used to secure and chain boats to help avoid theft
• Is used to store the boat motors
• Gives children a shelter from rain and sun when waiting for the school boat
• Gives a place for merchants to sell gasoline, food, water, and other items to passing boats.

During the second part of the week, I returned to Leticia to finalize the process of incorporating the Asociación de Agricultores, Pescadores, y Artesanos de la Comunidad de La Libertad, a non-profit cooperative which the Amazon Pueblo project helped the village to form. A future blog post will help to explain “How to Form a Business in the Colombian Amazon” and provide suggestions for more business opportunities for the village! 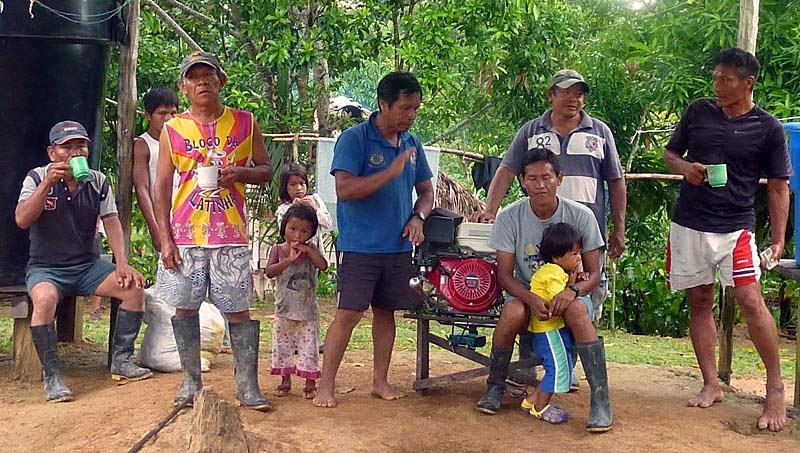 The work we are doing for the dock is done by volunteers from the village. We supply the materials for volunteers. The volunteers come from the village and are willing to help lend a hand. Not all people are motivated to help. The majority of the helpers range in age from 30 to 60.

On Tuesday, March 4 at 6:30 am we started the day with a simple breakfast of coffee and arepas (corn-based fried bread). The villagers talk while having breakfast, corral children, and joke with each other. They have the feeling of being an extended family who knows each other well. After about 45 minutes of eating, talking, and waiting for late arrivals, we set out to do our work. 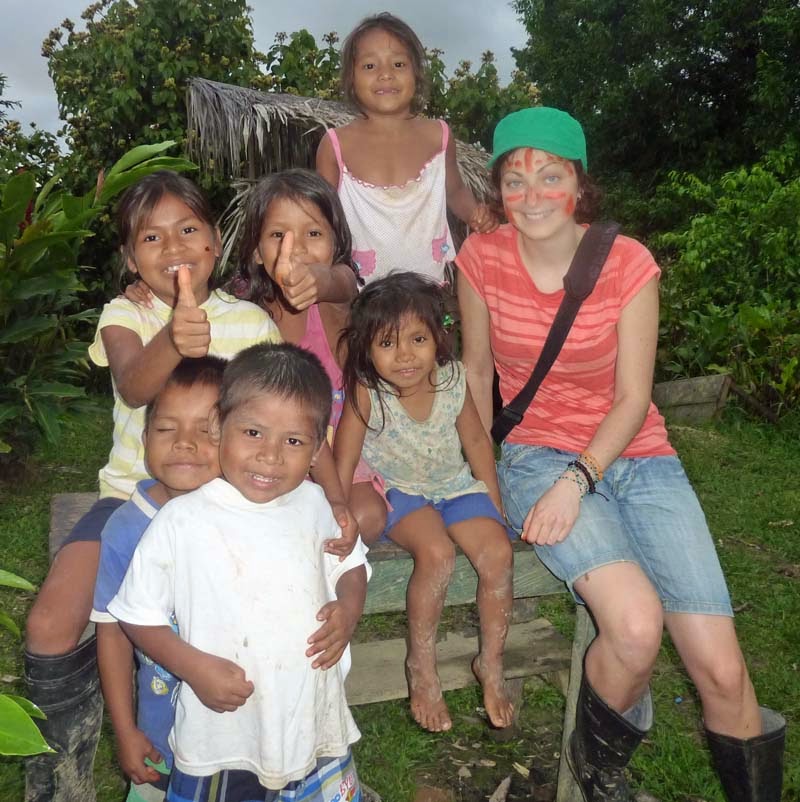 Our Volunteer Simona and the Kids

Simona, a volunteer from Slovakia, was helping in the village for the last week of my stay. She continued working for two weeks after I left. She taught English, helped paint the kitchen, and assisting with the business side of the project.

Simona contacted me about six months before her volunteer time. She speaks Slovak, Spanish, and English. Simona has spent time volunteering at a coffee plantation in another region of Colombia. She has education and experience working with tourism and handcrafts. Simona got along very well with the village children, helped with the operations of the project, and gave many ideas for the development of village handcraft production.
We hope to have her visit the village again soon.

Here is a link to Simona’s blog entry from her time in La Libertad:
http://pimentona.wordpress.com/2014/04/05/amazon-adventure-volunteering-in-the-lungs-of-the-world/ 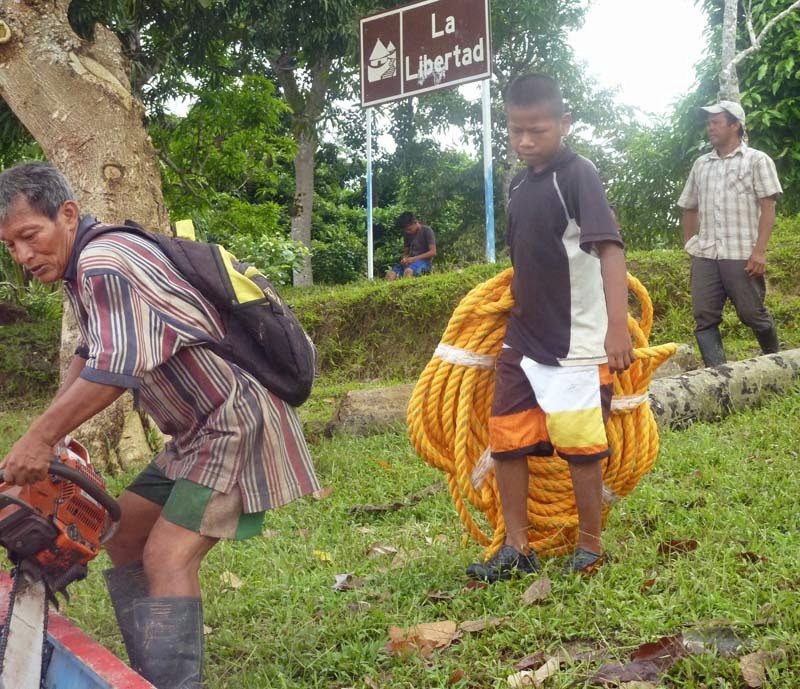 Energized from breakfast and the cooler morning air, we head off for the worksite. That particular day, we had 10 volunteers. The two youngest, Orley and Hector, are ages 8 and 9. Manuel, the oldest, and also our chainsaw operator, is 65. 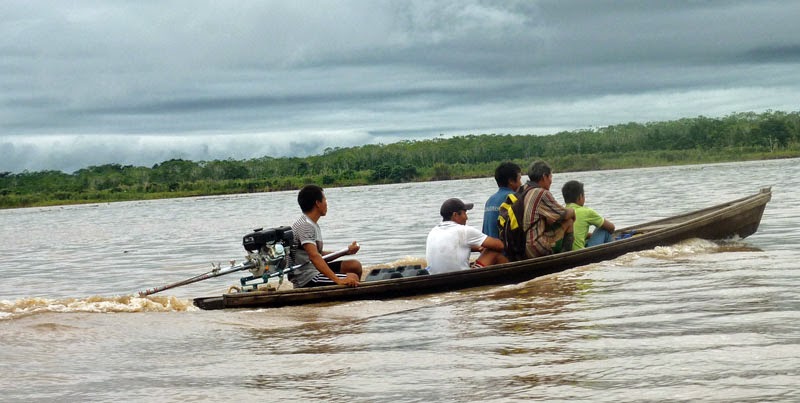 The River Trip to Cut the Trees

The trees we needed were not found around the village of La Libertad.

La Libertad was helped by a village about 45 minutes upriver. They gave us three trees and sold us two. The largest part of the trunks will be used as the floats on the bottom of the dock. These five trees are a specific rot-resistant species with excellent flotation properties. The price for these trees is $10 dollars US each. Gustavo explained to me how the village selling these trees is another indigenous village, friendly with La Libertad. The people of La Libertad also help this village with communal projects when possible. 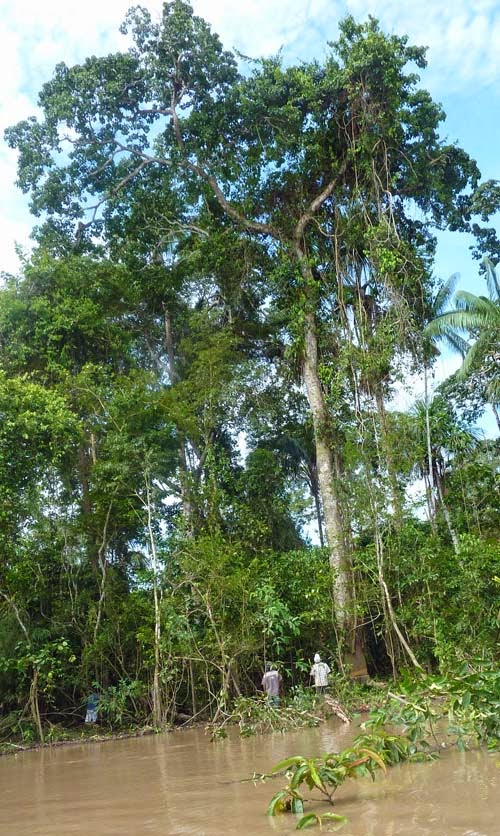 After arriving in the tree area, we slowly motored parallel to the shore for about 10 minutes. We eventually found a suitable tree. One of the requirements was that it be close enough to the water to be easily moved and floated.

All wood used in the indigenous villages is cut and milled using a chainsaw. It is cut while still green and usually used to build within a day of being cut. Many different types of trees are used, depending on what is being made. Wood used for posts that are being set into the ground is strong, heavy, and rot resistant. They have special types of wood for the framing of structures. They also have special wood that is best used for floors, walls, doors, and ceilings. Other specialty woods are used for handcrafts. These are particularly beautiful. 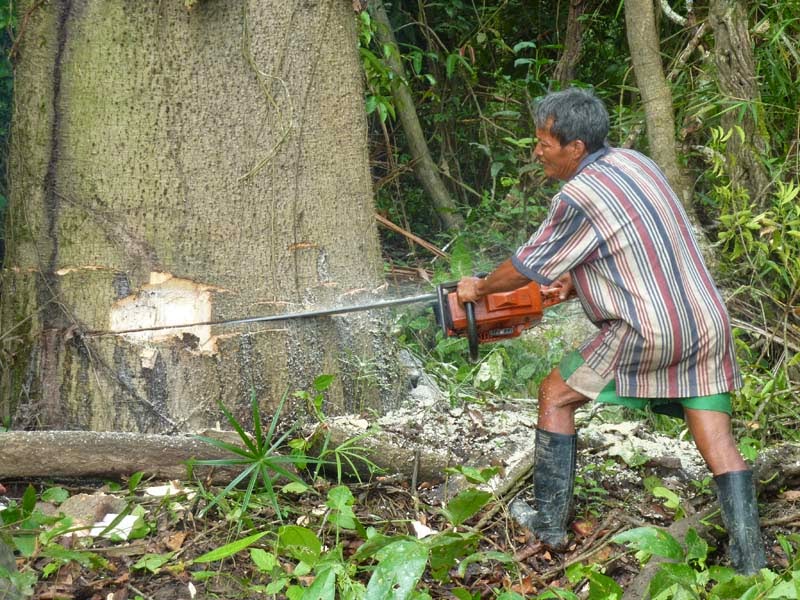 The tree that we are using for the dock also has the special property of toxic sap. It is very irritating to the skin when touched. I believe this is one of the reasons for its great rot-resistance. 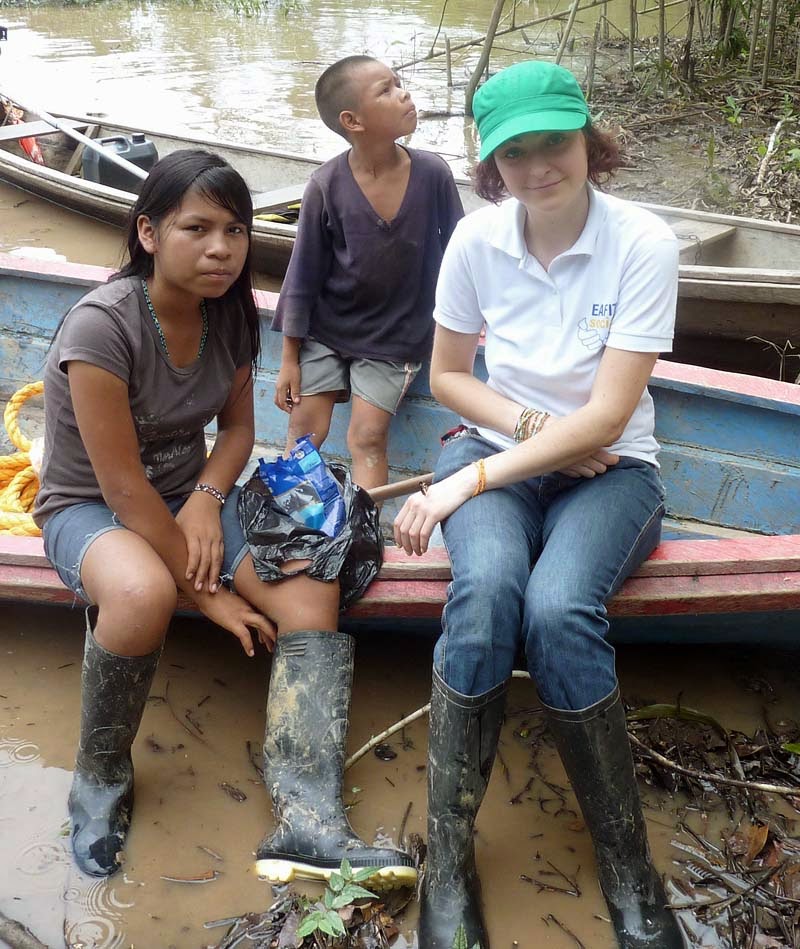 Waiting for the Trunk

Simona, Annie, and Orley are waiting patiently on the boat for the trunk to be cut. By 10 am the temperature was already in the 90s, but luckily we had an occasional cloud to block the sun. Unfortunately we had no drinking water, as we expected the work to go much more quickly. 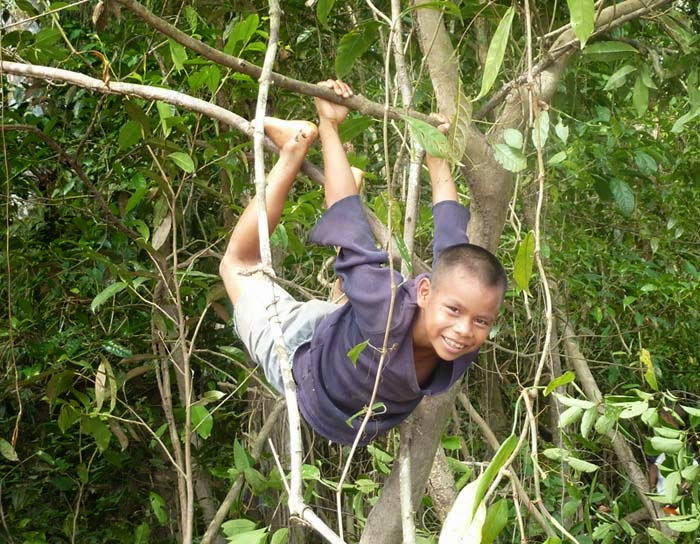 Monkey in a Tree

Orley and his cousin spent some time chasing monkeys and playing in the jungle. At times it seems the kids have more patience with waiting than I do!

A Video of the Tree Falling 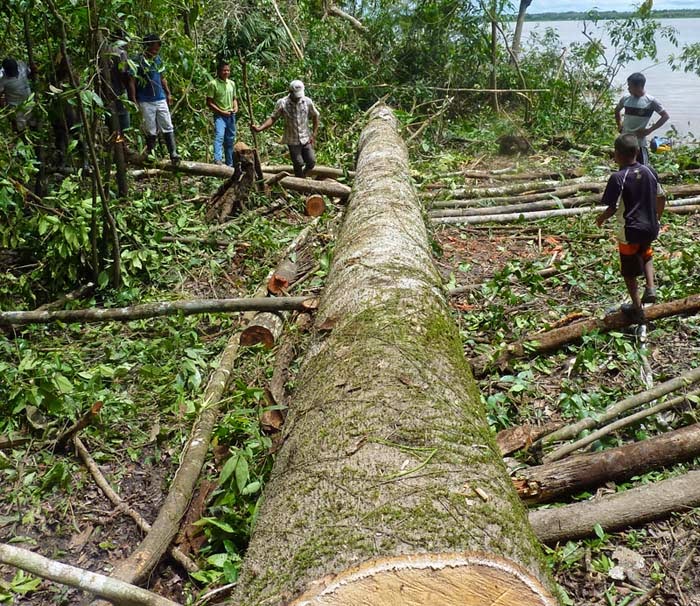 After the trunk had fallen, it had to be trimmed to size. The total length needed to be about 25 feet. After being trimmed to size, the log needed to be raised out of the ground and mud into which it had fallen. This was done by placing many small logs, used as levers, to slowly raise the trunk above the forest floor. When the trunk was at the proper height, it could be rolled onto other trunks that led to the river. 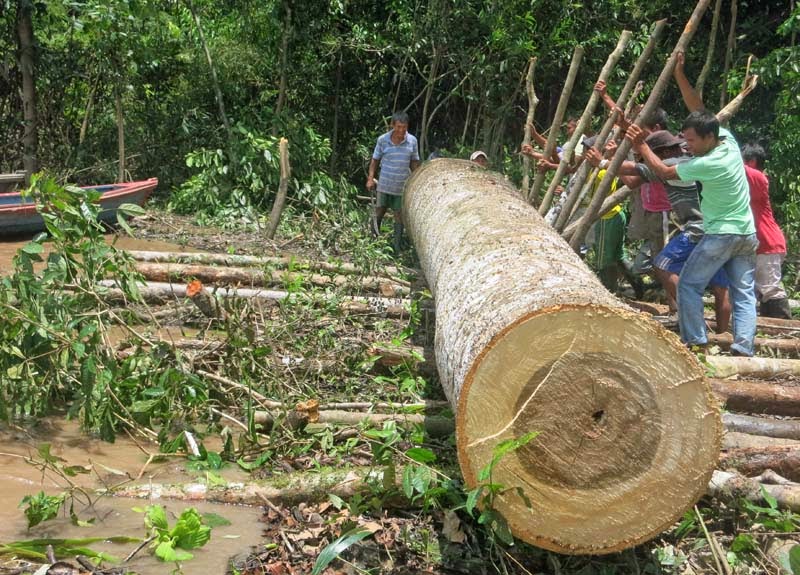 At last the trunk is at the proper height. Now the fun part –rolling to the water! 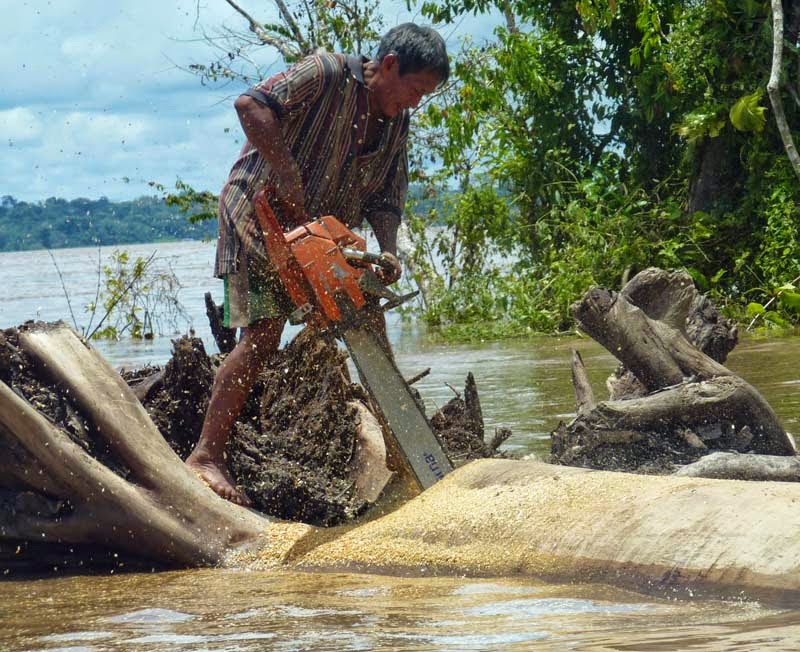 Manuel Cutting in the Water

Our second trunk was found already floating in the water. The only difficulty that this presented was that it needed to be trimmed to the proper size. Manuel needed to take off the base of the trunk and the top part that we were not using. All of this had to be accomplished while the trunk was floating in the river. If you imagine this part to be unsafe, I have to agree. The only thing worse than standing on the floating trunk is what he did next: he stood upon the bow of a boat to cut into the trunk! 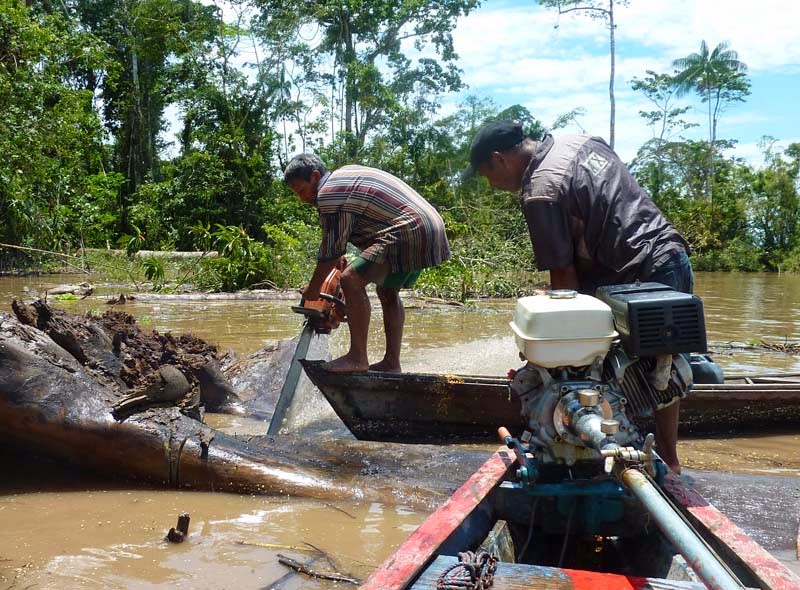 Cutting from the Bow

In this picture, Manuel is balancing on the bow of a boat, tippy even when sitting, and finishing the cut on the tree’s base. He only came close to falling once and almost dropped the chainsaw in the water. His chainsaw seemed to take quite a soaking and a beating! I have a new respect for the orange Husqvarna machine. I believe it has a 42 inch blade. 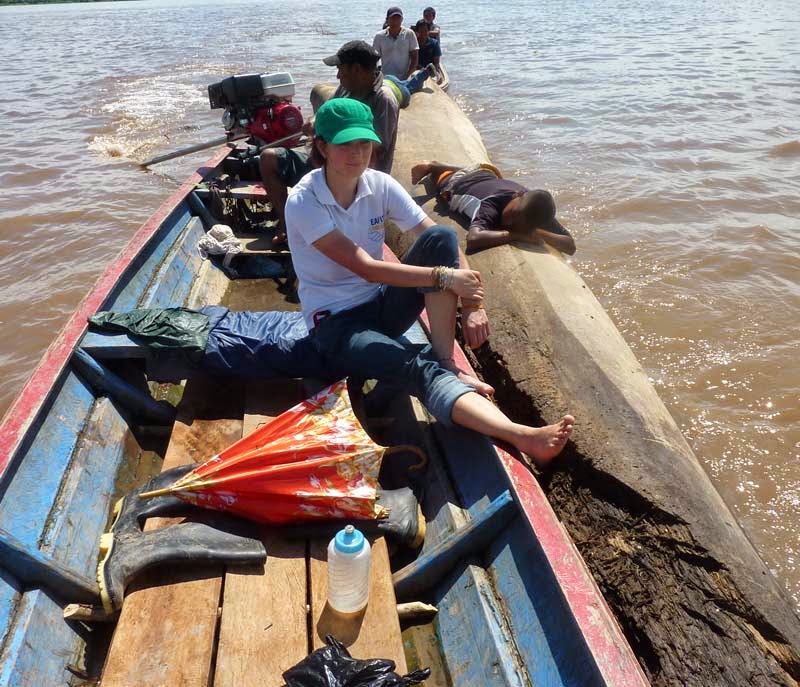 Taking the Trunk to La Libertad

After we had cut the trunk to size, it had to be secured to the boat. We did this with a 1 inch thick poly rope, the same rope which will later be used to secure the dock to the shore. The first half of the trip was difficult boating, as our boat’s motor was underpowered given the size of the trunk and current of the river. The second boat, which had been unsuccessfully scouting for another trunk, joined us and helped to propel our first trunk down and across the river to the village. The going was much easier with the trunk between the two boats. The trip back took about 1 ½ hours as opposed to the 1 hour we spent in the morning to arrive at the harvesting site. The trunk made a nice bed for Hector, but I was surprised that he did not fall asleep and roll into the water! 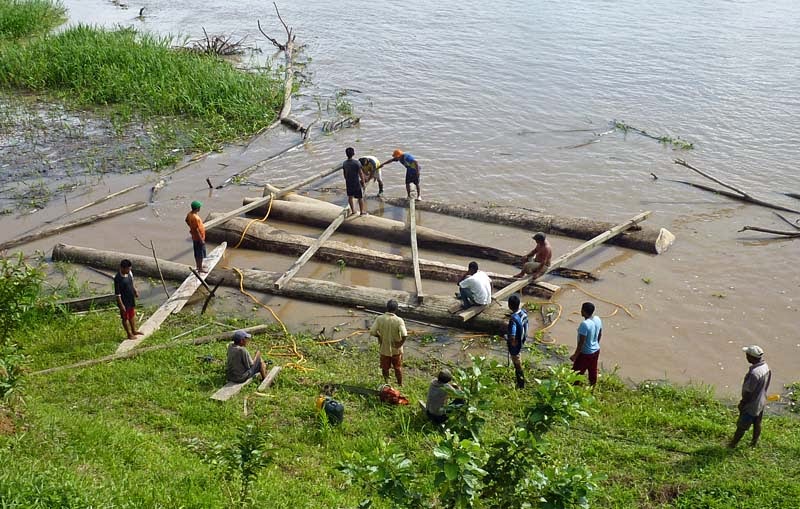 The Base of the Dock

In this picture, the base of the dock is almost complete. One more trunk is needed to ensure adequate buoyancy for the finished dock. The finished dock should include a floor, four walls for about half of the structure and a metal laminate roof. When funds are available, we hope to give it a good coat of paint as well! 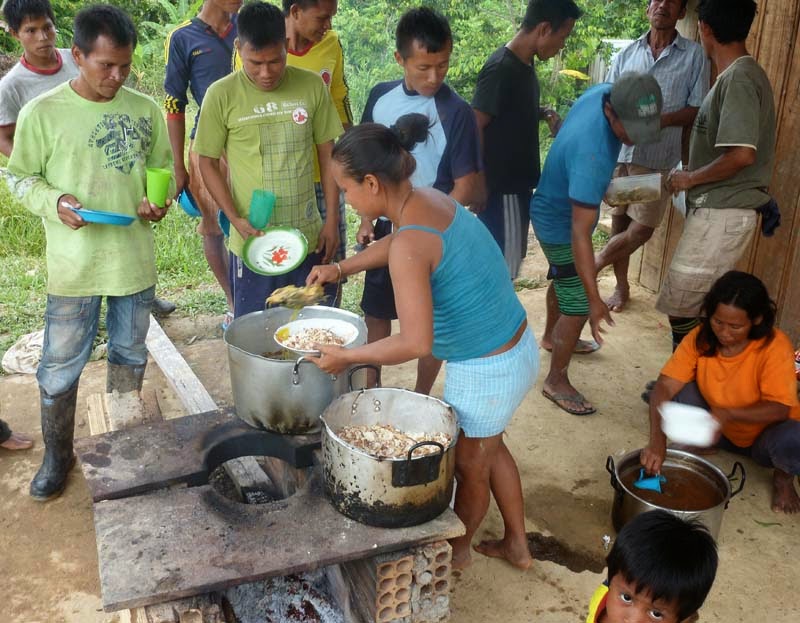 Late Lunch for the Workers

After the work day we give a lunch/early dinner to the volunteers. The women start cooking around noon and have everything ready for 4 pm. Everyone that pitched in for the effort is invited. For this meal we had fish stew, rice, plantain, arepa corn cakes, Kool Aid and coffee. As typical of a dinner in the jungle, we ate for over an hour. After eating, the village women cleaned-up until the sun went down. At 5 degrees south of the equator where we are located, the sun always rises at 6 am in the morning and sets at 6 pm in the evening.

I have never been to a barn-raising common to parts of the U.S.A, but I feel that our efforts to build the dock were equivalent to this. 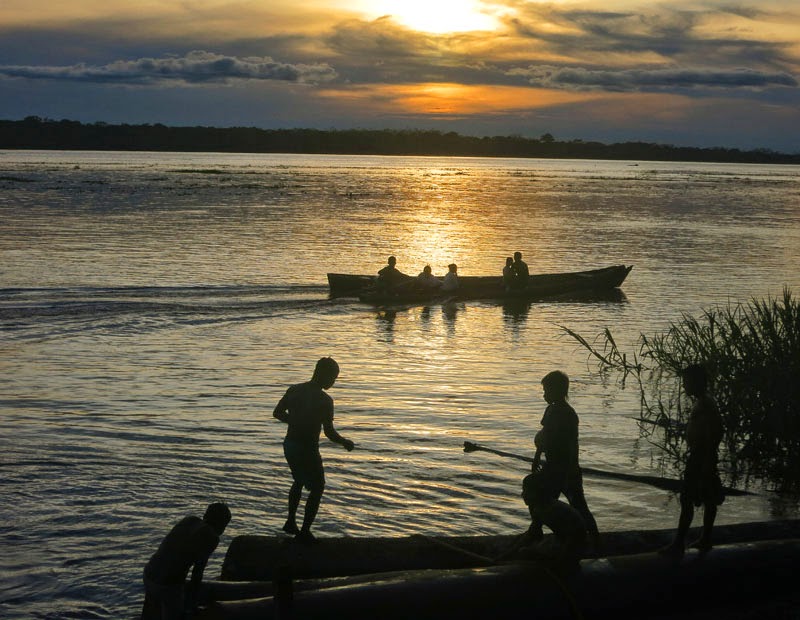 Sunset over the Trunks

At last the day’s work is coming to an end.

The last trunk needed for the dock has arrived at the village shore. 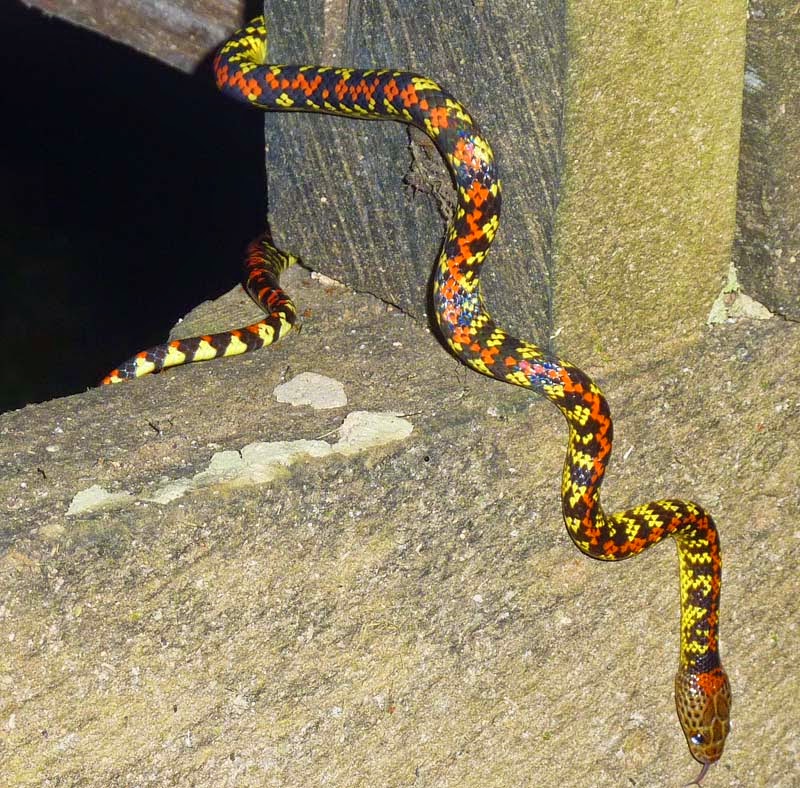 That night I noticed a visitor to our kitchen. Gustavo said that this was a good snake that was hunting for insects. It was not poisonous. I found it very beautiful.

Thank you to Simona and Stefan, who helped me during this time and also contributed some of the pictures used for this post.
Posted by Benjamin Angulo at 4:01 PM