Cortar Cabezas (The Head Cutters of the Amazon) 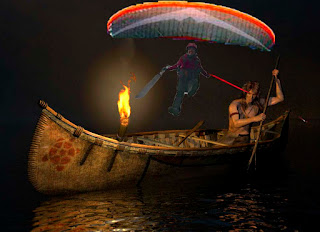 Image is an artistic recreation.

The project work I am doing now makes for not-to-exciting blog posts.    This work involves mostly studying, reading documents, filling out forms, planning for the future and corresponding with email.

To liven up my posts I am now going to occasionally add stories of things that I have experienced while living in the village.  Today’s post will be one such story.

One of the subdivisions of the project is Amazon Business.  In this area we help entrepreneurs in the village to start or grow their small businesses.  We help with business planning and give business loans of between $550 to $1,100 USD.  The aspiring business person must first submit a proposal detailing what they want to do, the steps they need to take, and a somewhat detailed list of for what they will be using the loan money.  During one of these planning meetings I first found out about the “cortar cabezas”!

At 6:30 in the evening a 30 year old, who I am calling Oscar, wanted to meet with me at Gustavo’s house.  We met on the porch as the sun was setting.  He shook my hand and we talked briefly until Gustavo brought up the reason for Oscar’s visit, which was to request a business loan.  Oscar was soft-spoken, and as was the custom of many villagers, he avoided most direct eye contact.

After I explained the program and expectations, with help from Gustavo, the time came for Oscar to state his business plans and for what he would need the money.  He explained to me that he wanted to start a fishing business.  He mentioned how he would fish, how many he expected to catch, how he would store and transport the fish downriver to sell in the city of Leticia.  We proceeded to list, item by item what he would need.  Line, nets, sinkers, net repair kit, Styrofoam coolers, and the like were noted by him.  Towards the end of the list he paused for a little longer than for the other items.  At this point he mentioned the item “escopeta”.  I recognized this word as meaning shotgun, but I believed my translation to be bad.  Spanish has many words that have multiple meanings.  I question again and Oscar confirmed that my translation was correct.  He had indeed meant he needed a shotgun.  I must have looked surprised, because after a moments silence he went on to explain that he needed the shotgun for the “cortar cabezas”.  Once again I doubted my Spanish translation skills, for I understood him saying he needed the shotgun for protection from the head cutters. 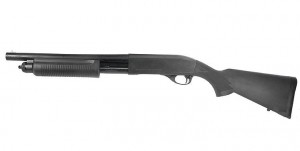 Gustavo was intently following our conversation.  He then stepped in to explain that when fishing at night, the time when the fishing is best, fishermen have the risk of being attack, robbed and killed by the head cutters.  After further questioning, during which time I was being eaten alive by mosquitos and other insects, I learned from them that the head cutters would wait on the banks of the river from high places, and then swoop down with paragliders onto a fisherman.  While approaching the fisher the head cutters would shine a special light into their eyes which would blind and make them dizzy.  After this they would kill and rob the fisherman.  It was for this that the shotgun was needed.

During this explanation I looked for signs that Oscar and Gustavo were joking.  They were not.  I politely kept a relaxed expression on my face, afraid that my slight shock/disbelief might offend them.  I tried to rationalize what they were saying.  Why would people who owned paragliders wait on the banks of the river to rob fishermen?  Who were these people?  Where did they keep their gliders during the day? From what high spots did they jump?  Was the light that they used to blind a laser?  Was this related to stores of the headhunters of the past?  Was this an “urban legend” of the jungle?  Additionally I knew that it was illegal to own private firearms in an indigenous village.

What did I do?  After adding up all the cost we found that he didn’t have the money needed to buy the shotgun.  Thank goodness for budgets.  But another question remains.  They say that in every story there is a grain of truth, and Oscar and Gustavo believed this story.  The grain of truth in this story –something I may find next time I am visiting the jungle…

Posted by Benjamin Angulo at 10:42 PM